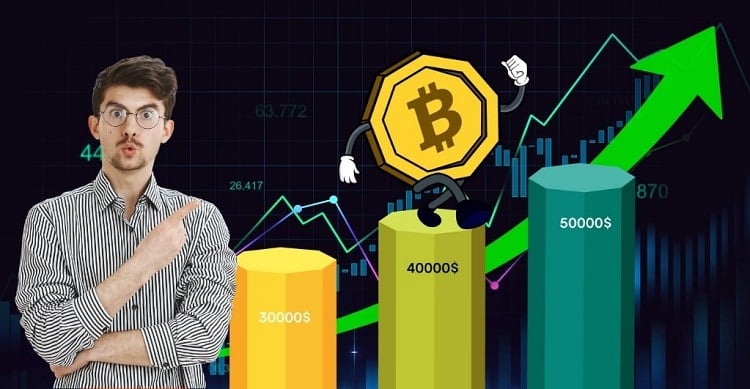 Cryptocurrency is decentralized and is not controlled by any entity or authority. Bitcoin (BTC), the world’s largest cryptocurrency, has become a kind of market controller for investors. As the value of Bitcoin grows, other cryptocurrencies also experience a rise in their prices. However, no one expected it to grow at an astronomical rate in 2021. In 2020, the value of Bitcoin rose from $8,000 to $29,000 in less than six months. During the global pandemic, when the economies around the world were faltering, BTC prices took an immense surge. Today, the value of Bitcoin continues to go up, becoming the hottest, most-in-demand financial instrument in the market. So, what is the best decision to take when the Bitcoin value goes up?

The Best Thing to Do When Bitcoin is Going Up

Being a cryptocurrency, Bitcoin will continue to move in a volatile manner. The momentum it has gained in the recent past represents its volatile nature. When the price of BTC tokens increases aggressively, most investors see this as a clear opportunity to make more money. Small-time investors see the growing value of Bitcoin as an opportunity to become millionaires. Big bulls of the crypto market see this rapid price growth and consider building up their crypto wealth. However, there is no certain answer to what one should do when Bitcoin is going up. There are only two ways about it, either buy more Bitcoins or sell them. Both these options have major risks involved.

When Bitcoin is going up, an investor could buy more BTC tokens at the earliest of the moment. Then, the investor could wait for the value to grow more and reach a desirable valuation. However, the volatile movement of cryptocurrency markets could lead to a fall in prices. And, within weeks or months, an investment worth millions of dollars could be worth less than thousands. Buying Bitcoins while their value is increasing has some serious risks.

Similarly, investors who chose to sell their Bitcoin wealth at peak prices face challenges as well. Selling BTC tokens at an earlier time could keep investors relatively less fortunate than those who chose to hold their digital wealth. That’s because Bitcoin prices are growing by an average of 10% every day. Simply put, selling BTC today would be worth a lot less than selling it next week or the coming month.

In the second half of 2020, the price of Bitcoin blew past the roof. BTC rallying is gaining momentum without any major hiccups in 2021. One of the main reasons why BTC is rising fast in 2021 is institutional buying. Large financial corporations and banking organizations are buying billions of dollars worth of Bitcoins. From JP Morgan Chase to Bank of America, major financial institutions are taking this opportunity to buy BTC during this ongoing spike in value. You can also make investment or purchase Bitcoin and can make good profit by choosing a platform like Bitcoin Lifestyle. It is an automated trading platform that focuses on making good profit from Bitcoin.

The Right Time to Cash Out

To avoid risks, the right time to cash out BTC would be when your investments get doubled, tripled, and at max – quadrupled. For example, if you bought BTC in 2020 at $8,000, it would be wise to sell some of it right now. The value of BTC has exceeded $32,000, which is four times that of your investment. You can apply a similar strategy by investing today.

Buying More Bitcoins for the Future?

If you are good at analyzing market indicators, you can consider buying more BTC. Despite the growing prices, buying a BTC token today would be considerably cheaper than buying one in the coming months. For short-time instant profits, buying Bitcoins for the future is a good way to diversify your portfolio.

Making the investment case for cryptocurrencies is as hazardous as doing so for gold. Bitcoin became desirable because people wished to buy it, and even more desirable when its price soared. The popular basis for owning cryptocurrency has been, quite simply, because today’s quotes will be higher tomorrow.

To stay profitable in the Bitcoin market, some investors consider waiting for the right moment. This moment comes and goes. However, since its ICO, Bitcoin has never showcased consistent, steady growth. It has also had the highest of highs and the deepest of lows. In 2021, one should consider analyzing the market well before deciding on buying or selling BTC as its prices continue to go up. If you are on the fence when it comes to selling, there’s always a middle way as there is for many things in life: Sell enough, maybe half, to become rich in reality and not just on paper.