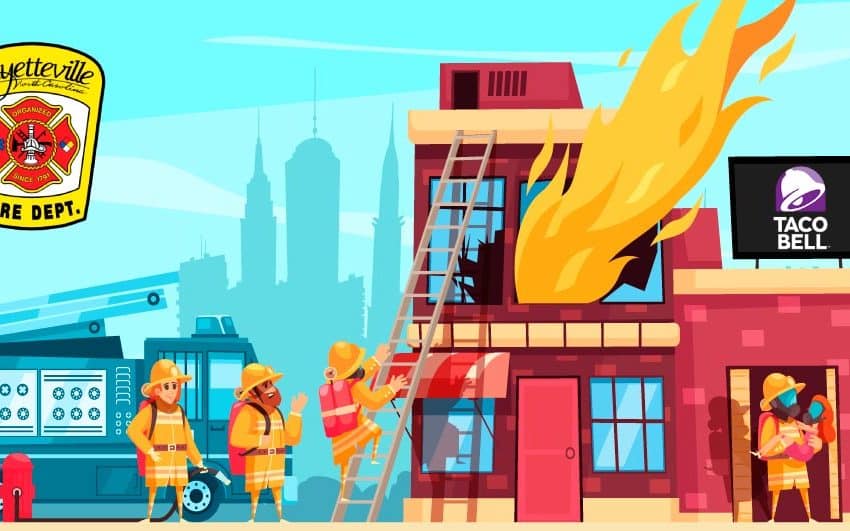 A press release from the Fayetteville Fire Department says that the Taco Bell outlet at 6894 Cliffdale Road, Fayetteville, NC reported fire on Sunday morning. The fire tenders of the Department reached the site at around 9.20 am and found the commercial structure in flames and smoke billowing out from it.

The units responded quickly, and the flames were brought under control. Nobody was injured in the incident.

There is yet to be a response from the Cumberland County Health Department.

According to the statement from the Fire Department, the cause of the fire is malfunctioning cooking equipment though investigations are still underway. This Taco Bell outlet had both dine-in and drive through arrangements. But lately, due to the lock-down and social distancing norms post the Covid-19 pandemic, the dine-in section has been discontinued. For the drive-through section, though, it is business as usual.

The drive-through timing at Taco Bell at Cliffdale Road is from 9.00 am to 1.00 am. It appears that the outlet was functioning in full swing when the incident took place, and the full complement of the morning shift staff was present at that time. Being slow hours that early, the staff had enough time to get away from the fire and inform the fire department, which arrived on the scene by 9.20 am and brought the fire under control.

Taco Bell is a chain of restaurants that serve primarily Mexican food and is based out of Irvine, California. The Cliffdale outlet serves a variety of tacos, burritos, quesadillas, nachos, and a range of “value items.” As of 2018, Taco Bell had more than 7,000 restaurants, 93 percent of which were independent licensees. The chain serves an estimated 2 billion customers each year. Apart from the USA, Taco Bell has branches all across the globe.

The Fayetteville fire department has launched a laudable initiative too. They have a goal to recruit more blacks to the fire department. Presently, there are several of them, including Rommie Melvin who works at Fayetteville Fire Station 11 with his truck with a team of two.