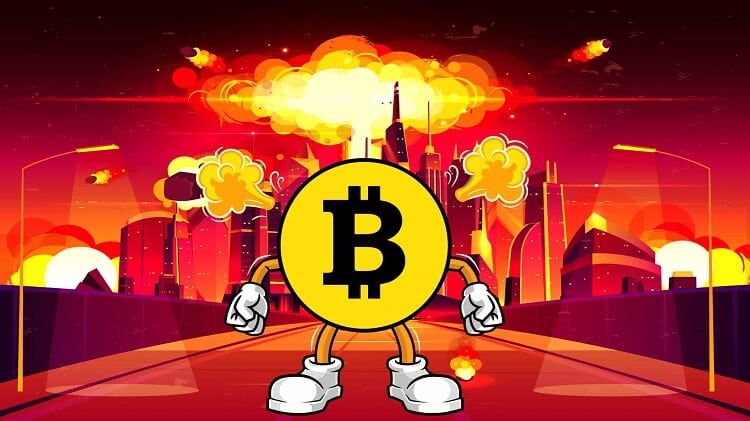 Back in 2008, an unknown person, Santoshi Nakamoto, invented cryptocurrency, popularly known as Bitcoin. In 2009, Bitcoin implementation was released as a new virtual or a digital currency. Bitcoin is just the online or virtual version of coins or cash. Blockchain manages all the transactions of Bitcoin. Bitcoin is the first person-to-person network of payment with no control of any middlemen or central authority. The lack of government control on Bitcoin has made trading in Bitcoin illegal in some countries. As the government has no track of Bitcoin transactions, this leads to tax evasion.

Can Bitcoin Destroy the World?

Bitcoin can affect the economy as it has properties that can authorize money and various other traditional currencies. As any government does not control Bitcoin, the chances of fraud are high. However, where goods are purchased on Bitcoin’s return, seller does not have any security or protection in case of fraud by buyer. Bitcoin is considered illegal in few countries, and the people dealing in Bitcoin earn and save a lot by not paying any tax amount. The increase in trade in Bitcoin will lead to the demise of banking. Bitcoin comes with lots of fake promises and scams. These fraud actions lead to disturb the economic system and increase corruption. All the transactions outside the control of the country’s financial regulators will soon destroy the world system. Sooner or later, Bitcoin will directly or indirectly affect every individual in the world who does not have any links with Bitcoin yet.

How Can Bitcoin Destroy the World?

Bitcoin keeps the power to destroy the world in many ways. If Bitcoins get accepted like money, it can kill the central banks and complete banking and financial structure. People would prefer to cut banking fees and bank queues. Bitcoin comes with lots of fancy and eye-catchy promises with sometimes sounds to be unrealistic. People will be inclined towards such promises, and the scan rate would increase overnight worldwide. Bitcoin is easy to hide the source of income and thus, no taxes to be paid. When people worldwide will not pay taxes and will be indulged in tax evasion, the country’s economy would crash. No taxes mean no income for the government, which will lead to no development in the country.

So, Should We Start Panicking?

Bitcoin has gained attention over the past decade all over the world. Due to the government’s lack of control, it is feared that Bitcoin is highly risky for investors and can be widely used for illegal transactions and money laundering. As the Bitcoin performance is not yet based on market fundamentals, it seems very risky and highly unstable. The Bitcoin functions are entirely based on their investor’s views and how they use them. Despite being completely digital, there are no chances of Bitcoin replacing the Dollar as global currency any soon. If played safe, Bitcoin will remain to be a good investment option for investors around the globe.

But, Bitcoin Also Has a Bright Future in the Coming Years

Bitcoin’s future is subject to lots of debate as it’s tough to predict the future of Bitcoin. Being completely digital can only be destroyed if computer crashes can be popular among the new generation with no mediator and high return. But this high return comes with high risk. If played safe and if some control of regulatory is put on Bitcoin, then Bitcoin’s future seems to be bright. And at this scale of growing Bitcoin usage and demand, the chances of it getting collapse also increases. Many big investors and experts suggested investing in Bitcoin to make good profit from it. If you are also looking to make a huge profit from Bitcoin then the Bitcoin Era is a perfect platform for you. Check Bitcoin Era Review by experts to know more about this unique platform.

Bitcoin is today’s most famous digital cryptocurrency that seems to gain more popularity day by day. One can make more money in Bitcoin or can lose it all in one go. As Bitcoin is not controlled by any regulatory, investors can go nowhere to claim their amount on getting cheated. High return, more money, growth, tax-saving are words that come to mind when one thinks of Bitcoin so are scams & frauds.